In two new interviews recently published interviews, Fabrizio Scotti talk about his new album, Right Now as well as other topics including his experience with his Marchione guitars.

From MUSIC RADAR, an interview by Joe Bosso… 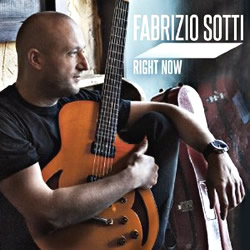 “The most difficult thing for me on this album was trying to find my own voice,” says virtuoso jazz-fusion guitarist Fabrizio Sotti, talking about his new disc, Right Now, due out on 14 May. “I needed to put my own signature stamp on songs that everybody knows. That’s not so easy. As a musician structuring the material but also as a guitarist, I needed to get inside the songs, where they became mine. Once I was at that point, my playing came very naturally to me.”

Along with several heavenly originals, Right Now features Sotti’s idiosyncratic jazz spin on a collection of popular classic rock tracks, such as Pink Floyd’s The Wall, U2’s One and Jimi Hendrix’s The Wind Cries Mary. Fabrizio claims that the spirit of Carlos Santana entered his head as he tackled the cover tunes.

What were the main guitars you used?

“My main electric guitar is a Marchione semi-hollow body. It’s an incredible guitar. Whenever I play electric jazz, that’s the one I rely on. As far as classical, I also use a Spanish, nylon-string guitar that’s made by Marchione…”

From GUITAR INTERNATIONAL, an interview by Mike Oppenheim…

In the past decades, the music industry has undergone radical transformations. Its uses of technology, avenues of distribution, impact on consumer practices, and the influence of record labels on artist’s output and aesthetics have all been significantly affected.

In fact, the collapse of the music industry has been predicted time and again, though this seems to be a vision of a false apocalypse.

With the advent of streaming and downloadable audio, the vast number of sites through which music is independently sold, and the abundance of recording artists, the music business is not what it once was. Artists are forced to become increasingly entrepreneurial.

They often diversify their skill sets, gigging and recording in various genres of music, marketing and distributing their own product, and become involved in other aspects of the industry, such as recording and producing.

New York-based jazz guitarist, Fabrizio Sotti, embodies these aspects of the new musician as well as anyone. From his work as a bebop and straightahead jazz guitarist, his career as a session musician, and his work as a producer and songwriter in genres including hip-hop, R & B, and pop music, Sotti’s experience is both extensive and diverse…

“I want to say something about this guitar that I’m playing now, it is a Marchione guitar. Stephen Marchione is an Italian-American luthier who I met about 15 years ago, but he built me my first guitar about three years ago, a semi-hollow body, which you can hear through the whole album. He also built me an amazing Spanish nylon string guitar with a cutaway, so I wanted to say that he is a luthier that does some great work. I think he’s really going to make history in guitar making, and I really love his work.”